Every Sunday the underclass of Barcelona briefly rule the backstreets. Robbers, crooks, pickpockets and hustlers congregate, sacks of stolen goods hanging from their shoulders. They begin in Plaza Reial, laying out their groundsheets and arranging the previous week’s proceeds. Laptops, phones, cameras, paintings, football shirts and trainers on the left. To the right, a regrettable selection of lower-end goods; lighters, soiled clothes and other such trinkets. Snaking through the middle, a queue of curious bargain-hunters cast their eyes from side to side.

Then the police arrive, sparking a fire of panic. Goods are bundled back into the sacks and they flee down the warren of alleyways leading out of the plaza. One or two unfortunate, or slow, souls are arrested to keep up appearances and the rest skulk in sidestreets and on corners, waiting for the police to disperse. Then, they reconvene on my street. 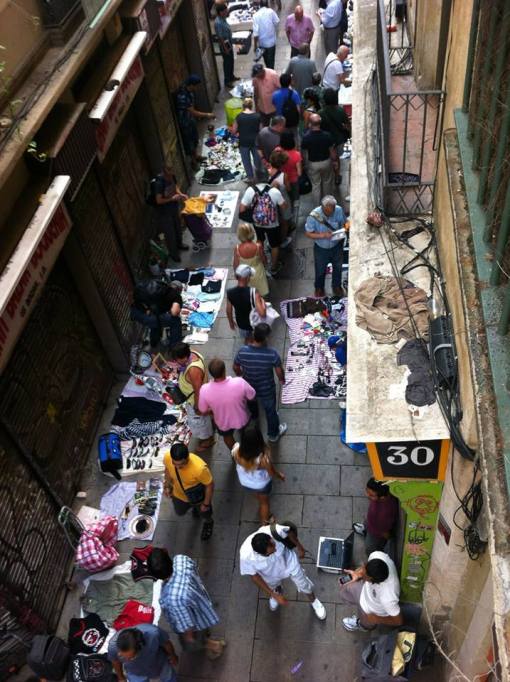 I perused the products from my balcony with a coffee and a cigarette. The same people are in the middle every time, the newcomers and beta males are shunted out to the dangerous edges, the parts where the police will arrive first. Straight ahead is hash alley, where Moroccan kids, too young to be prosecuted, deal for their families. They jump in and  out of doorways, passing money and weed between steel-barred windows.

I grabbed a handful of coins, locked up my apartment and went down to the street. “Don’t take photos!” A Spanish urchin growled at me. 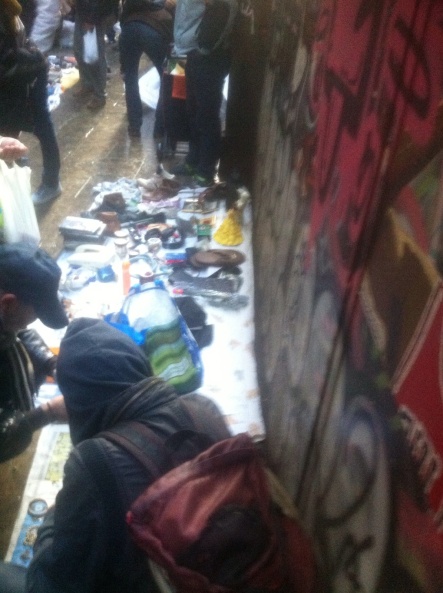 I stopped at the stall of an Algerian man I’d done petty business with on a previous occasion. I’d seen a Mont Blanc fountain pen. I picked it up to inspect. It was brand new and boxed but the nib looked broken so I asked to try it. He produced a scrap of paper from his pocket and I scribbled, unsuccessfully.

“Nah, it looks broken,” I replied.

“Trust me, it will work,” he said. I am prepared to trust most men, but a man who makes his living shifting stolen goods on the holy day is not one of them.

I saw the Colombian cleaner of my building looking at some shoes, the Pakistani men who sold beer in the evenings inspecting the pile of phone chargers in front of a Nigerian man. Unwitting tourists were flinching at the flurry of illegal activity and hurrying through to safety.

“No photos!” The Spanish urchin was shouting at me again so I quickened my pace. A flicker of silver captured my attention and I paused by the checked rug a Romanian man was presiding over. I looked closer, it was a minidisc player. I wondered how many Sunday’s he had been unsuccessfully bringing this to the party. I saw a mini wooden globe and investigated it more thoroughly.

“Policia!” A chorus of shouts echoed down the street and the vendors’ lives reverted to the same old game of cat and mouse. They grabbed their unsold possessions, launched their bags of swag over their shoulders and scattered. I was still holding the globe as the Romanian man prepared to flee. This was my last chance to purchase anything. I shoved two twenty cent pieces into his hands. He paused for a moment, grimaced, nodded then ran. I felt it was both competitively priced and mildly fitting for a venue that had briefly united the world.