“Six mojitos please.” It was 1:45am in Havana. Training for the marathon was not running smoothly. Alex, a derivatives trader with a penchant for Crossfit, and I rose at seven the next morning. We’d set an alarm but it wasn’t necessary. The area surrounding our apartment was equipped with what I like to call the big five: roosters, dogs, builders, continuous salsa music and a screaming baby. We downed two coffees, a ham and cheese toastie and half a pineapple each on our balcony. The sky was painted in the clearest blue and the early morning sun felt pleasant on the skin. I laced up my black Converse trainers as tightly as they would go. We hadn’t registered for the Cuban marathon, but we were running it anyway.

Gentle trombone music soundtracked our walk to the starting line. They were practicing for a show that evening. One of the men told me the two things all Cubans can afford are dancing and flirting. So, they do a lot of both. I’d tried to live like a local the previous night, but now it was marathon time. We ordered three preparatory waters from a street vendor. Cuba operates a two-currency system, so you have to double check prices and watch your change. “16 pesos,” he said. “Is each bottle really 5 pesos 33 and a third?” Alex asked. “15 pesos,” the vendor nodded in defeat.

We entered Havana Viejo, the touristic centre, and passed three restaurants proclaiming they were Ernest Hemingway’s favourite hideout; he sounds like quite an indecisive man. Down at the Malecon, the famous wall that separates the city from the sea, we found our first sight of the race. 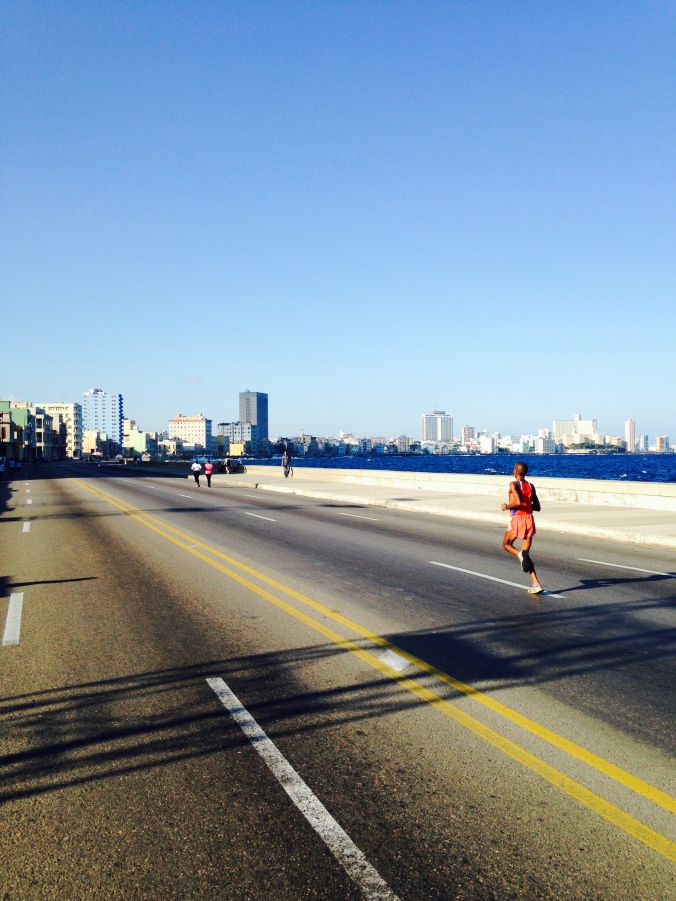 The course consisted of a 21km loop, which the participants were running twice to achieve the necessary distance. We walked backwards, passing runners who were completing their first lap of this unique track. The cityscape of Havana is a time warp like no other; a crumbling majesty of grand colonial buildings in all the colours of the rainbow.

We used the pedometer on Alex’s phone to walk 10km away from the finish line; the longest distance that our strict training regime of mojitos, daiquiris and cigars would allow us to complete. Here, we found a police motorcade surrounded by television cameras and reporters. The Cuban record holder, currently in first place, was about to pass by.

We waited for the trailing pack to catch him up but no one appeared. There were 5,000 or so other runners, but the professionals clearly hadn’t turned up. Twenty minutes later, the second and third placed runners arrived. We waited till the police were looking the other way, then slipped onto the tarmac and joined the race in fourth and fifth.

The first couple of kilometres were enjoyable. Exuberant Cubans cheering from the roadside spurred me on until my legs began to feel heavy. Alex, Crossfit strength beginning to show, edged ahead of me as the pleasant morning sun morphed into blazing midday heat. Rivulets of sweat were dripping down my face and my breathing was becoming increasingly erratic. I grabbed a bag of water from a roadside table, bit into it and splashed the liquid over my face and hair.

The shouts were louder now, the finish line was approaching. I felt pangs of cramp and guilt at tricking the crowd into offering their support. They were cheering for a fraud; I’d completed less than a quarter of a marathon. Still, it seemed foolish not to raise my arms aloft and punch the air in celebration as I crossed the finish line.

Reporters gathered, asking where I was from, how long I’d been training for and how I felt after coming fifth. England, eighteen months and hungover. We were ushered into a holding area where two typically laid-back Cubans in high-vis jackets congratulated us and asked to see our numbers. We were both topless, without numbers or proof of entrance. I said they’d fallen off midway through the race, because of the heat. The taller man nodded and asked our names. We told him. The shorter one leafed through a couple of hundred sheets of A4, trying to find ours in a list of thousands of names. He gave up and his eyes fell upon my black Converse trainers. Puzzled and suspicious, he pointed them out to his colleague. The taller man looked me up and down. I was red-faced, carrying a limp and still short of breath. 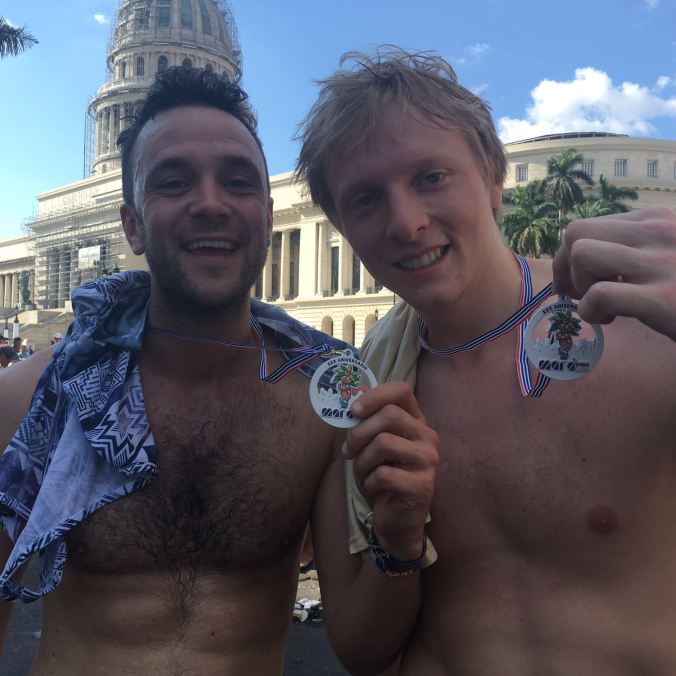 5 thoughts on “Crashing the Cuban Marathon”